An audit of the state’s allocation of federal money shows millions in questionable spending.  The review singled out two agencies – the Department of Mental Health and the Department of Social Services – for a lack of accountability.

The audit is an annual inspection of the state’s handling of $8.4 billion worth of federal funds. 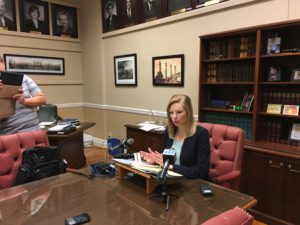 Among the numerous issues, state auditor Nicole Galloway points to a troubling sign with the Mental Health Department’s failure to keep records on money paid to 21 group homes for individuals with developmental disabilities.

“$1.5 million was paid to these group homes with no documentation” said Galloway.  About $938,000 was the federal portion.  The other portion of that was state dollars. And so we question these costs. We don’t know if they’re appropriate or not because there was no documentation if they were.”

A misallocation of federal money can trigger a misappropriation of state money as the two sources are quite often linked to each other in funding programs.  The auditor’s office questions about $1 million in Department of Mental Health payments late last year.

According to Galloway, a lingering problem is a lack of safeguards with the Department of Social Services (DSS) child care program, which spends $135 million to care for 64,000 kids.

“For the seventh year in a row, auditors found care givers may have received inappropriate payments due to the department’s inability to prevent payments to ineligible clients or child care providers” Galloway said.

A new issue uncovered by this year’s audit was the DSS’s failure to meet a five year old federal requirement to review the eligibility of many doctors, hospitals and other health care providers to receive reimbursements from the state.

87%, or 28,000 of those providers receiving funding from Medicaid and the Children’s Health Insurance Program (CHIP) have not been reviewed by DSS for eligibility.

Because the audit is merely a sampling of operations, the possible misuse of funds could be much more widespread than the audit reveals.

For example, the audit questions about 77% of nearly $20,000 DSS paid to 13 providers due to licensing irregularities.  If similar errors were made for the remaining 1,000 providers in the same category, over $1.1 million could have been improperly allocated.

Galloway thinks the lack of oversight and accountability with federal dollars raises a red flag, given the state’s current financial state.

“When we are in, basically a budget crisis, where we’re going have a $500 million budget hole next year, every single dollar counts.  And when we find state dollars and federal dollars that shouldn’t be paid, those are our tax dollars.  We need to have appropriate oversight here, so every dollar counts the way that it should.”

After slicing $146 million from the current year’s spending, Governor Eric Greitens has proposed $572 million in budget cuts to shore up the state’s finances in the fiscal year which begins in July.