Missouri House Democrat Brandon Ellington of Kansas City hosted a town hall Saturday over a gas leak which has been plaguing a city neighborhood for years.

A flurry of complaints about petroleum odors both inside and outside of businesses and residents rolled in during late 2014 and early 2015.

The pungent smell was caused by a leak to an underground storage tank at a gas station in the neighborhood.

“A lot of families have had multiple deaths with the exact same cancer, which is not an anomaly when you have three women in the same house that die from the same cancer” said Ellington.  “And all of this is related to benzene exposure.  So we know it’s benzene in the area.  We know it’s gas flumes in the area.”

Ellington’s town hall was meant to inform the public about the danger and what’s being done to fix the problem, which he says is not enough. 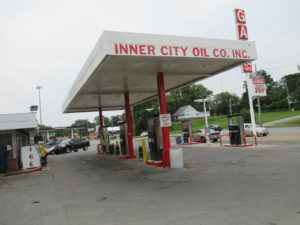 In late 2015, the gas station’s owner, Zill LLC, removed an underground storage tank at the facility. The state Department of Natural Resources (DNR) has also made numerous repairs to sewer lines.

Despite the work, the odor and contamination remain a serious issue.  On top of everything else, Ellington says it’s not known how far reaching the flumes, which get into peoples’ systems through water out of faucets, are reaching into the community.

“There’s no way of judging, at least according to our state departments (DNR), how far or how fast those gas flumes are traveling.”

In August of 2015, then Attorney General Chris Koster filed suit against Zill, LLC., alleging the gas station never followed up on a work plan to address a petroleum leak into the neighborhood’s sewer system.  That lawsuit is ongoing.

But in August of 2016, Zill LLC announced it would pay $300,000 to a group of six property owners and others in the neighborhood, which is known as Round Tip.

Ellington says Zill claims it’s done its part by replacing the storage tank and paying into the Missouri Petroleum Storage Tank Insurance fund.  The insurance fund, by statute, is charged with cleaning up contamination.

DNR has conducted various studies and asked citizens to report possible cases of gas coming into their houses.  But that’s not enough according to Ellington.

He says neither the city nor the state have taken an active role in conducting awareness campaigns or tests of the ground for contamination.

“It’s literally like a cap of silence that’s they’re trying to place over this contamination issue” said Ellington.  “And that’s the craziest thing I’ve ever seen in my life as far as bureaucracies and state and city departments being knowledgeable, but not wanting to admit anything or wanting to get involved with anything.”

Ellington said he arranged the town hall with the intent to get various agencies involved in the process.  DNR was in attendance to assist with getting people signed up to have their houses tested for benzene or contamination.

The Department of Health and Senior Services was also present at the town hall.  Ellington says that agency told him it had resources to remove some of the contamination at residences.

It’s not known how many deaths in the area are connected to the contamination.  The most recent data from the Department of Health and Senior Services is from 2013, before the complaints about the odor started rolling in.

Documents from DNR show a gas leak in the area was known as far back as 2006.

Previous Post: « Grichuk comes up as the hero as #STLCards take down Cubs on #Opening Day
Next Post: General Petraeus and presidential historian Jon Meacham headline Churchill weekend in Fulton »