You are here: Home / Sports / Molina will finish his career as one of the all-time greatest Cardinals 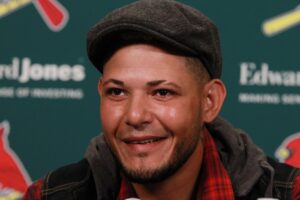 Yadier Molina smiles as a reporter asks a question. Molina and the Cardinals reached a three-year extension. (photo/Bill Greenblatt, UPI)

The St. Louis Cardinals reached agreement today with Yadier Molina, considered to be among the greatest players in franchise history, on a three-year (2018-2020) contract extension.  Financial terms of the contract were not disclosed.

“Yadier Molina has demonstrated for many years his importance to the Cardinals organization and his ability to perform at a consistently high level on some of the games’ biggest stages,” stated Cardinals’ Chairman Bill Dewitt, Jr.  “We are pleased to announce on this special Opening Day, that Yadier will remain a St. Louis Cardinal for several more years, as he continues to add to his many career accomplishments and his franchise legacy.”

“It is with great satisfaction that we are able to announce today that Yadier Molina will remain in his proper place as the centerpiece of our team for the next several seasons,” said Cardinals’ Senior Vice President/General Manager John Mozeliak.  “His experience, leadership, work ethic and special ability to help bring out the best in those around him are qualities we value greatly, and they will remain important as we seek to win not only now, but also in the coming years, when many of our organization’s top young pitchers begin to emerge at the Major League level.”

The two-time World Series Champion (2006, 2011) has appeared in a franchise-record 89 postseason games and owns a team-record 90 career hits in the postseason, including a dramatic two-run homer in the 9th inning of the Cardinals 3-1 National League Championship Series Game 7 win over the New York Mets in 2006 that helped propel the Cardinals to the World Series.

Molina is the younger brother of former Major League catchers Bengie and Jose Molina – the only trio of brothers to have each won a World Series Championship.

Entering the 2017 season, Yadier ranks 10th all-time among native Puerto Rican’s in career batting average (.285) and he is one of just 20 players from his homeland to have reached the 1,500 career hit plateau.  Yadi currently stands 20th in RBI (703) among his countrymen, just eight RBI back of his brother Bengie (711).