U.S. Attorney General Jeff Session visited St. Louis on Friday. Sessions spoke to members of law enforcement along with state and community leaders about the surge in violent crime in America in recent years. During his speech at the Thomas Eagleton U.S. Courthouse in downtown St. Louis, the Attorney General began by citing the great strides in reducing violent crime in the past four decades. 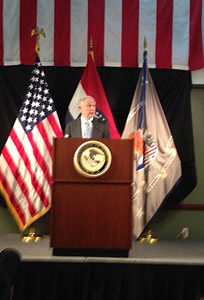 “First, we should remember some context. In the past four decades, our nation has won great victories against crime. Overall, crime rates remain near historic lows. Murder rates are half of what they were in 1980. We have driven the violent crime rate down to almost half of what it was at its peak. The good people of St. Louis have seen this progress firsthand: In 2013, the violent crime rate here was less than half of what it was at its highest point 20 years before.” Sessions said.

The Attorney General warned that the spike in violent crime in recent years could continue if steps aren’t taken.

“My fear is that this surge in violent crime in St. Louis, and throughout America, is not a “blip,” but the start of a dangerous new trend. This increase risks losing the hard-won gains that have made our country a safer and more prosperous place; gains that were made on the backs of the brave men and women in uniform.” Sessions warned.

“Our nation is in the throes of an epidemic of heroin and opioid abuse. According to the CDC, heroin-related overdose deaths have more than quadrupled since 2010. On average, about 140 Americans now die each day from a drug overdose. That means every three weeks, we lose as many American lives to overdoses as we lost in the 9/11 attacks.” said Sessions.

Sessions added, “Unfortunately, the people of St. Louis know this problem all too well. Last year, 256 people in this city died from an opioid overdose. That is almost double the total from the previous year — and more than the number of murders during that time.”

“We need criminal enforcement to stop the transnational cartels that smuggle drugs across our borders, and the thugs and gangs who use violence and extortion to move their product. One of the President’s executive orders directed the Justice Department to dismantle these organizations — and we will do just that.” said Sessions.

Following his speech, Sessions met with members of law enforcement in a closed door meeting. Meanwhile, Sessions’ visit was only met with about a dozen protesters outside of the courthouse.