Missouri Republican Governor Eric Greitens has signed a measure dealing with a key component of his agenda – altering the legal system. 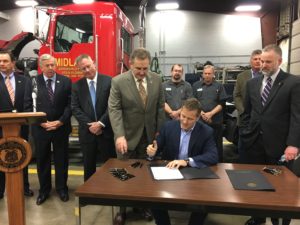 Billed as a means to help grow jobs, the measure changes the procedure for determining expert witness testimony in jury court cases.

Greitens claims the bill, only the second he’s signed into law since taking office in January, will prevent misinformation from influencing judicial proceedings.

“When crooked trial lawyers bring in shady witnesses that act as experts while pedaling junk science, it make it harder for justice to be done” said Greitens.

The law stiffens the threshold for admitting expert testimony be calling on judges to determine the accuracy of an expert’s conclusions, rather than determining simply whether the witness is qualified as an expert.

The measure Greitens signed was House Bill 153, which was sponsored by Representative Kevin Corlew (R-Kansas City).

Corlew spoke during the bill signing ceremony, which was held at a Jefferson City trucking company, as did Senator Doug Libla (R-Poplar Bluff), who handled the legislation in the Senate.  Corlew said the measure will improve the delivery of justice in Missouri courts.

“It’s a big step to make sure that expert evidence is not based upon junk science, but upon reliable facts and data, reliable scientific principals and methods” said Corlew.  “This will go a long way to help the truth seeking function of our courts, make sure that expert evidence is based upon reliable principals, and not simply as a result of how much you can pay an expert to say what you want to say.”

The new law moves the state legal system into alliance with the Duabert standard, which makes trial judges the gatekeepers of expert testimony, rather than having juries decide if the information is accurate.  The federal government and many states use Daubert.

However, some critics contend the standard forces judges to be amateur scientists, with many lacking the scientific knowledge to effectively fulfill their role as gatekeeper of expert testimony.

Opponents of the measure, such as the Missouri Association of Trial Attorneys (MATA), argue the move will make proceedings longer and more expensive because judges will be charged with extensive vetting of expert witnesses.

“If your option is you’ve got to pay a doctor $5,000 to close his practice for two days to come and determine whether or not he’s going to be allowed to testify, or move forward with your case, there’s some cases where it just doesn’t warrant going forward and trying to get justice.”

Critics, including Barnes, say the change will burden courts with longer, more expensive proceedings without improving the quality of expert witnesses.

During the signing ceremony, Greitens claimed the law will help protect businesses from frivolous lawsuits by unscrupulous trial lawyers.

“Businesses who have customers here, and could make money here, have been afraid to expand here.  They’ve looked at our neighbors or at other states, and they figured ‘Well at least there, a lawsuit wouldn’t ruin my business’.”

Also present at the signing ceremony were Senator Mike Kehoe (R-Jefferson City) and Lieutenant Governor Mike Parson (R-Bolivar), a former state senator.  Both men had sponsored the same legislation in previous years, which failed to move to the governor.