(NASCAR)—Kyle Larson has broken out of his runnerup rut by sweeping the weekend at California Speedway.  Larson won Saturday’s race in the second-tier NASCAR series, then started from the pole and held off Brad Keselowski in overtime in the Cup race Sunday.  Larson’s teammate, Jamie McMurray of Joplin, was sixth after starting eighth.

Larson had finished second in the last three races and battled Martin Truex Jr., most of the afternoon. Truex finished fourth, one slot behind sometime-Missourian Clint Bowyer was fifth, his first top-five finish since the Bristol Race of August 22, 2015.  Bowyer drove for an underfunded team last year while waiting to join Stewart-Haas Racing this year and had only three top-tens and a best finish of seventh in 2016. 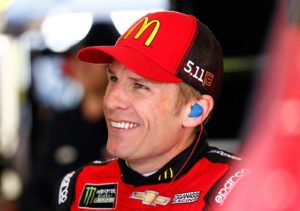 NASCAR shifts back to the east coast next weekend to run at the shortest track on the schedule—Martinsville (Va.) Speedway, a .526 mile oval that has hosted NASCAR races since 1949. It’s called “the paperclip” because of its 800-foot straightaways and its tight 588-foot turns.

Mercedes won 19 of last year’s 21 races but Ferrari had shown in pre-season testing that its cars had adapted well to new regulations imposed during the winter and were legitimate challengers to Mercedes going into this season.

The Gene Haas American team had a terrible day.  Romain Grosjean, who got the team’s first points in its first race last year, was out after just thirteen laps.  The other Haas car also had mechanical problems and was gone after 46 laps.

Formula 1 heads to Shanghai for the Chinese Grand Prix on April 9.

(IndyCar)—Several IndyCar drivers turned their first hot laps of the year at the Indianapolis Motor Speedway on Friday in a test session for Honda-powered cars. No lap speeds were released because the event was a manufacturers test day for Chip Ganassi Racing, Schmidt Peterson Motorsports, and Rahal Letterman Racing.  Team Penske used the opening as a team test day for its four drivers.  Penske runs Chevrolet engines and the team’s drivers will get a second practice round next Saturday when Chevrolet teams take to the track. Joining Penske for that test will be A. J. Foyt Racing and Ed Carpenter Racing.

IndyCar’s next race is April 9 on the streets of Long Beach, California.