Cuonzo Martin may have found the linchpin to helping turn around the Mizzou men’s basketball program with the addition of Michael Porter Sr. to his coaching staff.  The former Mizzou women’s basketball assistant is back in Columbia after spending the last year at Washington, helping coach the men’s team under Lorenzo Romar.

Michael Porter Jr. is the top recruit for the Class of 2017. Jontay Porter is a high-level recruit for the class of 2018, but could reclassify and move up to play with his older brother. Michael and Jontay played at Father Tolton Catholic High School in Columbia winning a state championship in 2016.

They won the state championship in Washington this season, playing for Nathan Hale High School in Seattle.

Porter Jr., in an teleconference with the media, stated he is exploring his options after being released from his National Letter of Intent by Washington yesterday. 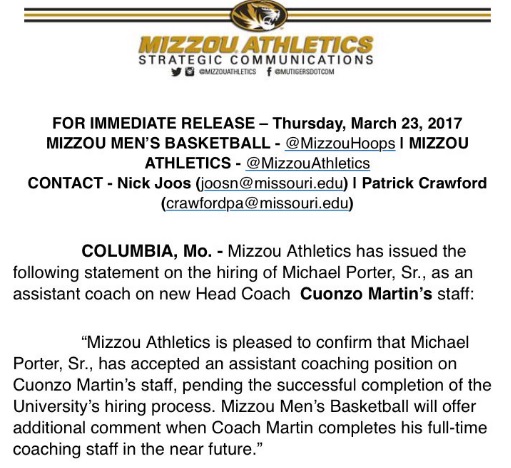