(NASCAR)—The rumor mill in NASCAR circles just keeps grinding when it comes to Carl Edwards and Edwards keeps saying “no” means “no.” But people keep talking, as some were doing at Phoenix International Raceway this weekend.

The buzzing that Edwards would return to racing next year was noisy enough that FOX Sports’ Tom Jensen texted Edwards.  Edwards response was pretty firm: “Like I said at the press conference, I had no racing plans then and do not now. There is no hidden agenda—those here reasons are it.  No Plans.” 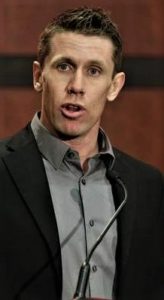 Edwards says he’s satisfied with his accomplishments on the race track. He says he wants to devote tome to important people in his life. And he wants to be as sharp thirty years from now as he is now.

Don’t be surprised to hear that he has a few more reiterations of that position as the season and the speculation continues.

Daniel Suarez, the rookie who took over Edwards’ ride for Joe Gibbs Racing had his best race of his four-race Cup career, finishing seventh in a race won by Ryan Newman.  Newman’s win broke a long dry spell for him and for Richard Childress Racing.  Newman’s last victory was the Brickyard 400 in July, 2013 when he was driving for Stewart-Haas.  The last time RCR won a race was November 10, 2013 when Kevin Harvick (now driving for Newman’s previous team) won the Fall Phoenix race.

Newman won by staying out on old tires while most other competitors ducked into the pits for a splash of fuel and two new tires on the last caution period caused when Joey Logano blew a tire on the front stretch and hit the first turn wall with five laps left.  The race restarted under the green-white-checker protocol and Newman was able to run the last two laps with his better-shod competitors desperately trying to get to him.  Kyle Larson was second for the third straight time and for the fourth time in the last five races.

Joplin driver Jamie McMurray ran strongly through the first two segments of the race and had a top-ten car until the flurry in the final laps when he dropped back to fifteenth.  Clint Bowyer was thirteenth.

NASCAR wraps up its West Coast swing next weekend at California.

(IndyCar)—Take a look at several laps on the St. Petersburg street circuit that IndyCar raced on to start its season.  A tiny camera on Conor Daly’s visor gives you a driver’s eye-view of several laps on a bumpy circuit at speeds of 53-151 mph and turns that can exert 2.3 g’s on the driver.  Click on “full screen” to get the total effect.

IndyCar’s next race is on another street circuit—Long Beach, April 9.

(FORMULA 1)—Formula 1 starts its season with its re-designed cars next weekend with the Grand Prix of Australia.