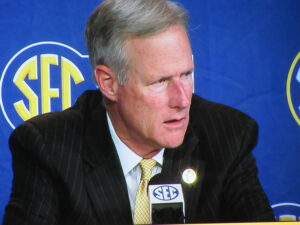 Mizzou Men’s Basketball (8-24, 2-16) advanced to the second round of the Southeastern Conference Tournament with a thrilling overtime win over Auburn (March 8), but was unable to continue its run, falling to Ole Miss (20-12, 10-8), 86-74, on Thursday night at Bridgestone Arena.

The two squads traded baskets for the first 15 minutes of the half, as neither team could pull ahead by more than six points until the Rebels went on a 9-0 run to open a 39-28 lead with 2:41 left in the half. Phillips paced the Tigers in the opening period with 10 points, while Puryear chipped in nine points. Mizzou made six first-half three-pointers, but trailed 46-35 at the halftime break.

Mizzou was able to cut the lead to nine points at the 17:49 mark of the second half, but could never get closer as the Rebels’ lead continued to grow over the final 20 minutes. VanLeer drained two late threes, but the effort was too little, too late as the Tigers fell, 86-74.

The setback eliminated the Tigers from the SEC Tournament and ended the team’s season. The Black & Gold finished its 2016-17 campaign with an overall record of 8-24, and immediately look toward next season where an experienced group of youngsters are set to return as veterans.