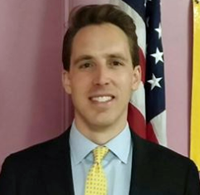 Shortly after he took office in January, Hawley joined twelve other states in suing the federal government over a measure aimed at protecting waterways from coal mining waste.

Even through Missouri produces very little coal, Hawley says repeal of the “Stream Protection Rule” is a win for residents.

Andy Knott with the Missouri Chapter of the Sierra Club contends the state would benefit in the long run by weaning itself off of coal.  He claims renewable sources such as wind are now cheaper and cleaner.

“Springfield, Missouri last year signed a new wind contract” said Knott.  “They’re getting a bunch of new wind energy from a wind farm in Oklahoma.  And last fall, they stated that it was going to be 25% cheaper that the electricity from their own coal plant.”

As far as finding cleaner and cheaper sources of energy, Hawley says that’s not his call.

“That’s a choice for policy makers to decide.  My job is to protect and defend the people of Missouri.  And with the prospect of the Obama administration rules that were not authorized by statute, not authorized by Congress, and would have the effect of dramatically increasing energy prices in the state, we’re compelled to take action to stop that.  And I’m proud to say that it has been stopped.”

Knott, with the Sierra Club, counters that the state’s continued reliance on coal is bad for business, jobs and air quality.

“A lot of big companies like Google and Facebook, they’re only locating in places where they can get 100% free energy.  Missouri is about 80% coal right now.  We need to get with times and reduce our dependence on dirty coal, and do so for economic development reasons and for job creation reasons here in Missouri.”

Missouri produces the third lowest amount of coal in the U.S.  Of all the state’s in the lawsuit, only Arkansas manufacture’s less, while most are among the top producers in the country.

Missouri has one coal mine, which ships it’s product to Kansas.  According to Knott, the state’s utilities spend $1.4 billion per year to have coal shipped to their facilities.  Ameren Missouri is the state’s largest utility, operating the largest number of coal fired plants.

The Obama administration rule so strongly opposed by Hawley was drafted to impact a region far away from the state.  The “Stream Protection Rule” was designed to protect 6,000 miles of streams and 52,000 acres of forest throughout Appalachia by requiring coal companies to keep tabs on water quality near mines and replenish waterways once mining is complete.