You are here: Home / News / Sterk asks Anderson to step down. 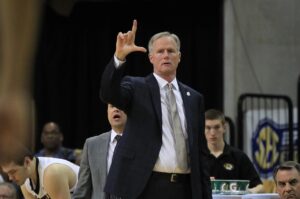 Missouri head basketball coach Kim Anderson gives his team signals during the first half against Vanderbilt at the Mizzou Arena in Columbia, Missouri on February 11, 2017. Missouri defeated Vanderbilt, 72-52. Photo by Bill Greenblatt/UPI

Mizzou Athletic Director Jim Sterk has asked Kim Anderson to step down as Tigers’ men’s basketball coach once the 2016-17 season has concluded.

“This decision has been very difficult for me personally because of the tremendous respect I have for Kim,” Sterk said in a statement released by the Mizzou Athletic Department. “I know how hard he and his staff have worked to turn the program around over the last three years, however, the lack of on-court success has resulted in a significant drop in interest surrounding our program, and we could not afford for that to continue another year.

“A national search will begin immediately to identify and recruit the very best person to lead Mizzou Basketball into the future and we will utilize the services of a search consultant to assist in the identification and evaluation of candidates who are capable of returning our program to national prominence,” Sterk added.  “In order to protect the integrity of the search, I will have no further public comments regarding the process or the status of any candidates until the announcement of our next head basketball coach is made.”

Anderson is 26-67 heading into this weekend SEC Tournament in Nashville, TN.  The Tigers will play Auburn on Wednesday night, just four days after those two teams wrapped up the regular season.

Anderson released a statement through the Athletic Department on Sunday afternoon.

“Missouri is a special institution to my family and I, and I am grateful for having had the opportunity to serve as the head coach at my alma mater,” Anderson said. “While we have faced significant challenges over the last three years and been unable to achieve the on-court results everyone would have liked, I do believe we have been able to stabilize the program while watching our players become responsible young men on and off the court.

“I would especially like to thank my staff and players who have worked so hard to turn this program around.  I’m proud of the growth I’ve seen in our players academically, athletically and socially since their arrival on campus, and feel very good about our efforts to serve Columbia, the University and the State of Missouri through impactful events and organizations such as the Boys and Girls Club, Tigers on the Prowl, Rally for Rhyan and the University of Missouri Children’s Hospital.”