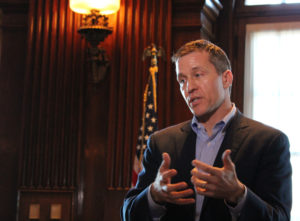 In opening remarks, he pointed to his executive order banning lobbyist gifts to his office as an example of how he was doing things differently from previous governors.  Greitens had campaigned on a platform of eliminating corruption in state government.

But when asked about contributions to his inauguration, he failed to answer why he didn’t disclose the dollar amount of those donations, or if he planned to provide them in the future.

“I’d be happy to talk with the inauguration committee about that again, but right now the plan that we have is to release the list that we released.”

While previous governors have revealed the dollar figures of private donations to their inaugurations, Greitens has only offered a list of benefactor names.

On the heels of the announcement of the three candidates offered to fill a Supreme Court vacancy, Greitens was non-committal about which, if any of them, he preferred. He said he would interview them to find out about their judicial philosophy before making an appointment.

Greitens had previously said he wanted to change the process of selecting high court judges, and stated during the press conference that it’s “imperative” for there to be a judicial system citizens trust in.

When asked about education cuts he’d made in his budget, Greitens noted he was allocating more money for K-12 funding.  In actuality, his plan calls for slightly less than the Department of Elementary and Secondary Education’s request for a $102 million boost to its $5.91 billion budget.

Greitens took a harder stance toward higher education.  After slicing about $70 million from the current year higher education budget shortly after taking office, Greitens indicated further cuts could be coming.

“We’re going to have to have strong, clear and sometimes tough, leaders on campuses who will look at programs that are under-performing, and are unnecessary, and are willing to make cuts in those programs” said Greitens.

His budget calls for a roughly $150 million cut to higher education in the next fiscal year, which starts in July.  The department had requested less money, but only about a third of what Greitens is slashing.  He quoted former Indiana Governor Mitch Daniels who now heads Purdue University, saying there’s a tremendous amount of fat and waste in university systems.

Greitens also vowed to make changes at the Department of Corrections.  After a scandal involving millions in lawsuit payouts to prison employees, Greitens replaced the department’s top ranking official earlier this year.

At the press conference, he praised new DOC Director Anne Precythe and made a pledge to prison workers.  “We need to do some work to get to all of the front line folks who are doing hard work, and often putting their own safety at risk on behalf of all of us to keep us safe.  We need to get down and let them know, as I and Anne have, that change is on the way.”

Greitens said his big picture plan for DOC is to establish programs that promote successful outcomes for prisoners returning to society.  He said implementing those ideas will require tremendous work.

Previous Post: « No charges yet against Mizzou students for allegedly making anti-Semitic remarks
Next Post: Class 4 and 5 district basketball scores from 3/2/17 »