Former Columbia NASCAR driver Carl Edwards isn’t looking back with any regrets about his decision not to drive this year—and isn’t completely closing the door to not being on the track again in 2017.

NASCAR columnist Bob Pockrass talked with Edwards when he was in Concord, NC, to shoot a Subway commercial with his replacement, Daniel Suarez, after the Daytona 500. (He still has a relationship with his one-time racing sponsor.) He says he watched part of the Great American Race but wasn’t glued to the television set during the whole thing. 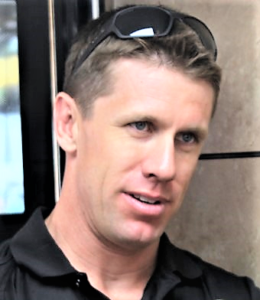 Yes, he’s heard the “really funny” rumors about why he has stepped aside.  He put the rumor that he’s sitting out this year to join another team next year into that category.  But he says he might be a substitute driver if necessary. “I’m paying attention enough and staying really fit…I’ll always be ready of somebody needs a driver for something,” he said.

Edwards plans to go to Atlanta to counsel Suarez before next weekend’s race.  Suarez, last year’s Xfinity Series champion, stepped into Edwards’ ride this year and ran his first Cup race last weekend at Daytona. He finished 29th after being caught in one of several multi-car crshes. Edwards got his first Cup win at Atlanta in 2005 and recorded two more later. He was in the top ten in 12 of his 19 races at Atlanta, with ten top fives.

He told Pockrass, “The chance to go win the Daytona 500 is something that is really cool. But that’s one of the things that I gave up when I made the decision.  But there is a lot of gain, too. Things have been really, really good—definitely no regret…It’s been a while since I made all the hard decisions. I’ve moved on.”

He’s not ready to discuss what he’s working on, although calling it “neat stuff” but not “earth-shattering.”  One of the things he has been doing is flying people places.  They’re folks who have health issues and are not able to fly commercially. “To see what some people are going through, it puts it all in perspective,” he told Pickgrass.”