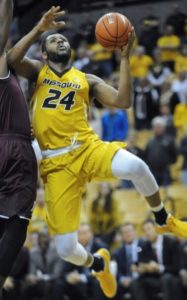 The Missouri Tigers had their worst offensive game of the season, shooting under 25% for the game after shooting less than 19% in the first half (5-for-27).  That led to a 60-43 loss to Texas A & M on Senior Night at Mizzou Arena.

Puryear scored eight points, and Frankie Hughes added eight points and a team-high six rebounds.  Terrence Phillips led the Tigers with 15 points, six of them coming in the final minute on a couple of three-pointers that were well beyond the arc. Phillips, the SEC leader is assists at 4.8 per game had none in this game.

Overall, it was a horrible basketball game to watch from both teams.  They combined to shoot just 15-of-50 three-pointers and they only combined for 50% at the free throw line.  A&M 6-for-12, Mizzou 8-for-16.

Previous Post: « Class 1 tournament basketball scores, along with Class 4 and 5 district scores from 2/28/17
Next Post: #STLBlues continue to slide, losing to Edmonton »