As Republicans gathered for Lincoln Days in Springfield this weekend, Governor Eric Greitens recounted his victories while in office so far. 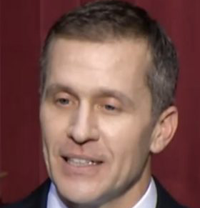 “What we did on the very first day is: we put an immediate halt to all new regulations,” the Governor said speaking to a crowd of supporters.

Those in attendance say the Governor’s words are on par with the direction they want Missouri to go.

“It was uplifting, to be honest with you,” said Bill McCoy, first vice president of the National Pachyderm Federation.

The Governor didn’t forget to mention the passage of right to work.

“It will greatly enhance Missouri’s defense industry,” said McCoy. “When a consultant would look at Missouri when they were helping a company relocate, the first question was: ‘Are you right to work?’.’No. We are not right to work’. ‘Well, okay, we’re leaving’. It was just that simple.”

Greitens says the legislation will create economic growth not just from new jobs coming in, but new investment from companies that are already here. And many agree that economy and jobs are where the state needed a different approach.

“When you’re 47th in the nation in job performance, creation of jobs, that’s not good enough. So, we have to start doing different things,” said Lieutenant Governor Mike Parson.

“We overrode that governor more times than any time in history,” he said. “And to have a Republican Governor working with the legislatures, it will be a tremendous factor for the state of Missouri.”

Greitens says his goal is to ensure the country’s economic come-back starts in Missouri.

“We are only at the very beginning of a fantastic conservative revolution in this state,” said Greitens.