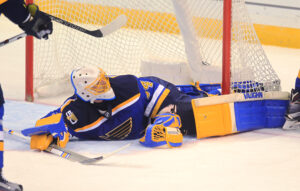 St. Louis Blues goaltender Jake Allen lays out after making several saves against the Florida Panthers in the third period at the Scottrade Center in St. Louis on February 20, 2017. Photo by Bill Greenblatt/UPI

Vincent Trocheck’s goal with 4.8 seconds remaining in the third period, gave the visiting Florida Panthers a 2-1 win over the Blues on Monday night at Scottrade Center.  It was the Blues second loss in a row after winning six straight.  Kyle Brodziak, in his second game back from a broken foot, scored for the Blues and Jake Allen finished with 31 saves.

The Blues dropped to 7-3 under Mike Yeo and remain third in the Central Division, three points ahead of Nashville and chasing the Blackhawks. The Blues don’t play again until a Sunday trip to Chicago.  Allen knows how big every point is now the rest of the way out.

“Those are huge points right now. Couldn’t end up with two points and it slipped away,” said Allen.