Signs have been posted at some Missouri Capitol entrances stating concealed carry permit holders can now bring guns inside, but firearms are prohibited in legislative chambers and hearing rooms. State Rep. Nick Marshall (R-Parkville) is pleased with the change, but thinks citizens should also be able to take guns into those areas currently restricted.

“I’m certainly happy that the law is being followed now. Let’s not be hypocrites. Let’s not create a special political class that has its own safe zone when we say that safe zones are bad,” says Marshall. “That seems to be the message from the Capitol over the past few years is that we think good law-abiding, honest citizens being armed is a good thing.”

Marshall wants to change state law to go a step further and also allow guns in the chambers and hearing rooms. He plans to file a bill to address that issue in the coming days.

“To say that ‘oh yeah you can have your firearm and you can be safe out in public but you can’t be safe when you come around us.’ Come on,” says Marshall.

Metal detectors were added at some Capitol entrances last month, prompting Marshall to offer his gun to those citizens while visiting the Capitol. Under the latest change, he won’t go as far as letting them drop their guns off in his office. 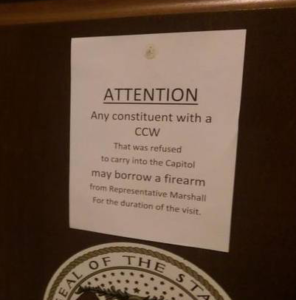 “I don’t think that that’s really what my place is, as a state Representative, to be a safekeeping place for everybody’s firearm,” says Marshall.

Marshall says those taking guns into the Capitol’s chambers and meeting places can’t be charged with a crime. They will simply be asked to leave.

Senator Jill Schupp (D- Creve Coeur) says “anyone, legislator or not, coming into the state house and carrying weapons, with so many children around, defies common sense. I feel very confident that the trained law enforcement professionals who work in our Capitol are exceedingly capable of keeping us safe. Let’s not interfere with their ability to continue to do their jobs well.”