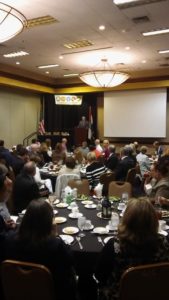 The Bolivar Republican spoke to about 150 business leaders, business owners and economic development professionals at the Council’s luncheon, which took place at the Capitol Plaza Hotel.

Parson wants to see more retirees move to the Show-Me State. He says about 10,000 Americans retire daily. He asked the crowd to imagine if just one percent of them moved to Missouri.

“Because if they’re from states like New Jersey or the East coast, New York, cost of living’s extremely high,” says Parson. “They make good money when they’re working, but how do we get them to Missouri where it’s a lot cheaper, a lot more relaxed atmosphere for them, and if we can get one percent, that’s more houses that’s more homes, that’s more groceries.”

Parson also wants to roll back what he describes as “frivolous regulations”, saying that Missouri’s regulatory environment “has gotten out of hand”. He tells the audience that the biggest thing he heard from Missourians during the campaign involved government overregulation.

“I think everybody is concerned about government getting too far into their personal lives through the regulatory environment, and frankly, you know, to a certain point, it makes people in business decide hey, do we expand, do we not expand, what is this regulatory environment going to be,” Parson says.

Parson says he wants to ensure that Missouri is a competitive place to start a business and keep current businesses thriving.

He also emphasizes Missouri-made products and jobs, saying that 80 percent of new jobs in Missouri come from existing businesses.

Parson also spoke to Missourinet after his presentation, discussing his address as well as right-to-work and the tight state budget.

Lieutenant Governor Parson confirms he’ll have a “conversation” with Governor Eric Greitens (R) about the Governor’s proposal to reduce the Missouri Department of Agriculture’s budget from $53 million to about $40.4 million.

“You know the House (budget) version, the Senate version, so we’re a long way from the final version,” says Parson. “But, you know, he (Greitens) is the governor. So, he has every ability to make those changes and at some point I’ll go in there and I’ll make my pitch for agriculture like I always have, and we’ll let the chips fall where they fall.”

Parson says Greitens, a fellow Republican, has been “very open” to any conversation they’ve had. Parson, a third-generation farmer, has a cow and calf operation near Bolivar.

The state Constitution requires the Missouri Legislature to approve a balanced budget by early May.

Parson also says right-to-work will be “huge” for Missouri.

“And let’s face the facts, I know it’s a very divisive issue, a lot of emotions involved, but we’re 47 of 50 in the United States in job creations. You know, so it’s not working the way it is.”

Parson says right-to-work will help businesses statewide. The law is scheduled to take effect on August 28.

Missouri Lt. Governor Mike Parson discussed his pro-business agenda, retirees, right-to-work and the proposed budget for the Missouri Department of Agriculture during an interview with Missourinet’s Brian Hauswirth on February 7, 2017. Click here to listen to the full six minute interview, which also addressed other topics, including the relationship between former Governor Jay Nixon (D) and former Lt. Governor Peter Kinder (R):