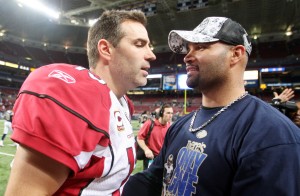 Kurt Warner who led the Rams to their only Super Bowl title in franchise history (St. Louis or Los Angeles) was voted into the Pro Football Hall of Fame on Saturday. The two-time NFL regular season MVP and MVP of Super Bowl XXXIV becomes the fourth member of those Greatest Show teams voted into the Hall of Fame.

Warner quarterbacked the high-scoring Rams who became the first team in NFL history to score 500 points in three consecutive seasons from 1999-2001. The ’99 team beat Jeff Fisher’s Tennessee Titans in Super Bowl XXXIV; the ’01 squad was upset by New England in Super Bowl XXXVI.

Wide receiver Isaac Bruce, a target of Warners and the late Don Coryell, who coached the exciting “Cardiac Cards” teams in the mid 1970s  were not voted in.