You are here: Home / Sports / #STLCards have locked down their ace. Carlos Martinez getting huge contract extension 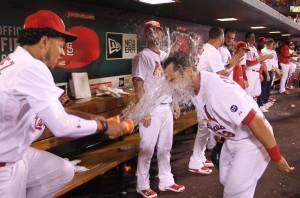 St. Louis Cardinals Matt Carpenter gets a cup full of water in the face from Carlos Martinez in the dugout after hitting a two run home run in the third inning against the Cincinnati Reds at Busch Stadium in St. Louis on September 23, 2015. The home run was Carpenter’s second two run homer of the night. Photo by Bill Greenblatt/UPI

FanRag Sports is the first to report that the Cardinals are set to give Carlos Martinez a five-year extension worth $51 million.

“I want to play my whole career with the Cardinals,” Martinez told STLCards.com.

The Cardinals could make the official announcement as early as Thursday, but the agreement eliminates Martinez’s arbitration hearing, and it is also the largest extension ever given to a first-time arbitration-eligible player.

The Cardinals rotation appears set for the forseeable future.  Martinez is locked in until 2021 with two option years. Adam Wainwright is signed through 2018. Mike Leake is signed through 2020, and top prospect Alex Reyes is under Cardinals control until he is a free agent after the 2021 season.