Missouri lawmakers are considering a proposal to allow semi-trucks to platoon at closer distances between each other. 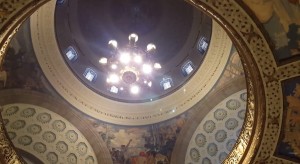 Under a test program conducted by the state Transportation Department, a trailing semi would travel roughly 50 feet behind a lead truck.

The driver of the vehicle in front would control the accelerator and brakes of the tractor-trailer directly behind it through wireless technology.  Both cabs would be manned.

At a committee hearing, House Republican Charlie Davis of Webb City, who’s sponsoring the measure, said the trucking industry would enjoy a fuel savings of up to 10 percent, while the state wouldn’t lose any revenue.

“If you understand how the trucking industry pays the tax to drive on our roads, it’s not by them buying fuel” said Davis.  “It is by the mile that (they) drive on the roads.”

During the hearing, several lawmakers made comments about the advancement of technology, with Chairman Bill Reiboldt (R-Neosho) stating he’d seen video footage for a similar test program in Colorado where the driver of the second semi wasn’t behind the wheel, but in the sleeping compartment.

At one point, Democrat Karla May of St. Louis called for the proposal to stipulate that the second tractor-trailer have a driver behind the wheel.

Tom Crawford with the Missouri Trucking Association testified in favor of the measure.  He claimed then Governor Jay Nixon seized on a fatal accident by a self-driving Tesla in 2016 to discredit and veto a similar bill passed by the legislature last year.

“Right before the governor’s veto message was the Tesla accident, which was completely unrelated to truck platooning” said Crawford.  “But it had technology involved in it, so they seized on the opportunity and the high profile crash to, kind of, use that as a reason for the veto.”

In his veto letter, Nixon wrote “long-term safety and reliability of this technology remains unproven.”

The 2016 measure waived the state’s requirement of a 300-foot following distance for commercial trucks connected by wireless technology, and established a pilot program lasting up to six years.

According to Crawford, this year’s proposal was purposely written to be brief and general in order for details to be hashed out during the legislative process.

“So the guy in front of me falls asleep, makes a stupid mistake of any kind, I don’t have time to react to save myself, my truck or any vehicles around me” said Wood.  “So that’s one of our biggest issues we have is the drivers.  We’re talking about 30-50 feet.  That’s the blink of an eye at 60 to 70 miles an hour.”

While testifying against the measure, Wood said despite technology allowing for travel at close range, trucks are machines with moving parts that are susceptible to mechanical failure.

“All the rest of these people are driving up and down the road with their families, and we’re going to have 160,000 pounds with four trailers and two trucks, just to test to see if it works?  There’s got to be a better way to test this.  And putting our citizens and my members at risk, I don’t believe is the correct way to test that.”

A state agency testified in support of the proposal.  Scott Marion, director of the Motor Carrier Services division for the Missouri Department of Transportation noted more than 15 other states had already begun to test truck platooning.