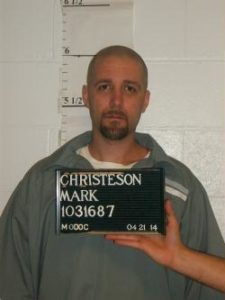 Christeson was convicted of three counts of first degree murder and was under three death sentences, for killing Susan Brouk and her two children near Vichy in central Missouri’s Maries County in 1998.

Missourinet’s Brian Hauswirth, who served as an official state witness to the execution, reports Christeson appeared to say “I love you” twice to two of his witnesses, before his eyes closed.

“I wanted to speak to him (Christeson) to see what type of a person he actually was, see if he had any remorse because of the crime,” says Heitman. “He never responded back, but obviously we know what type of person he is, you know he’s a murderer and he’s a rapist.”

“People can’t argue this is inhumane for lethal injection,” Heitman says. “The person just goes to sleep. There was no movement, it’s not torturous at all. So I don’t see how any courts could ever say that lethal injection is inhumane.”

Christeson was sentenced to death for the gruesome murders of 36-year-old Susan Brouk and her children Adrian and Kyle near Vichy. Adrian was 12 and Kyle was nine.

Christeson’s cousin, Jessie Carter, was also convicted for the murders. Carter, who later testified against Christeson, is now serving a life prison sentence, without the possibility of parole.

Prosecutors say Ms. Brouk was raped, stabbed and thrown into a pond and drowned. Kyle was stabbed and held under water, to drown. Adrian died from suffocation, and her body was also dumped in the pond.

“But now that they are above us, and watching over us, I know that I have the world’s greatest guardian angels anybody could ask for,” Harley Brouk said, crying. “This is a sad day, a happy day and a day that I will never forget.”

Harley Brouk then read a poem to reporters after the execution. She says Adrian wrote it when she was in the sixth grade. It was called “Our Love”.

Our love will always be there

Even when fate is not fair

Sometimes our love may be lost

But that’s not always the ultimate cost

Love is when you meet the unique

the one your heart is out to seek

Love is soaring to the sky

But not everyone can tell you why

Love is when your heart has a voice

What will happen is not your choice

Harley Brouk sobbed when she finished reading the poem, telling reporters in Bonne Terre that she will “never forget” her brother or sister.

Missouri Department of Corrections Director Anne Precythe read a statement from Governor Greitens to reporters. The statement notes Susan Brouk was a single mother whose life revolved around her children.

“Adrian was a seventh grader who did well in school and played volleyball. She hoped to one day be a veterinarian or a teacher. Kyle was only nine. He played soccer and dreamed of being an Army officer.”

The state of Missouri executed one convicted killer last year, six in 2015 and ten in 2014.

There was tight security in and around the Bonne Terre prison Tuesday night.