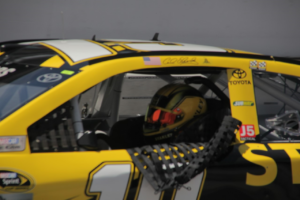 Columbia College Political Science Professor Terry Smith admits he doesn’t know Edwards, has no inside information and doesn’t know what Edwards’ politics are.

But he says the 37-year-old has a number of factors working in his favor in addition to being independently wealthy.

Smith thinks 2018 could be a perfect time for Edwards to step into high level politics as an outsider, much the way President Trump and Governor Eric Greitens did in November.  “If being an outside is still in vogue in 2018, people may come calling and say ‘Carl, could you run?’ .”

If he thinks Edwards possesses all the qualities needed to run a successful campaign, Smith says he has no idea what the stock car icon’s politics are.

“Ya know, if people want to put two-and-two together and make it four, then Nascar tends to be conservative-Republican.  But I don’t know if that’s Carl Edwards.”

Edwards graduated from Columbia’s Rock Bridge High School in 1997.  He briefly attended the University of Missouri before pursuing his dream of driving a race car.

Numerous media outlets speculated about Edwards possible run for office after Smith brought up the possibility on a Wednesday morning program on the Columbia NPR radio station.

When contacted later in the day, Edwards wouldn’t rule out politics to the Associated Press.  He quoted General Douglas MacArthur to the wire service. “No man is entitled to the blessings of freedom unless he be vigilant in its preservation.”

McCaskill is a second term Democratic U.S. Senator who Republicans have targeted as vulnerable in the 2018 election.