Much of Missouri is under an Ice Storm Warning through noon Sunday. 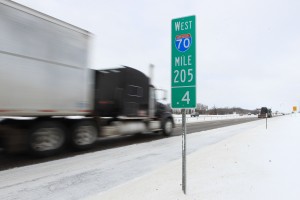 The National Weather service says waves of light rain will leave between a-quarter and three-quarters of an inch of ice on the ground.

Weather Service Meteorologist Wes Browning says the heaviest accumulation will be wedged in an area between I-44 and I-70.

“If you picture a triangle between Kansas City, Springfield and St. Louis, right in there would be the heaviest potential ice accumulation” said Browning.  “In that area we could be looking at anywhere from a half inch to three-quarters of an inch of ice accumulation.”

The Weather Service is predicting scattered power outages from fallen tree limbs during the event.  Browning is quick to stress the region is not going to see a catastrophic ice storm like the one which hit the state in 2007.

“That does not mean that some (people) won’t lose power.  I think they will.  But it’ll be of a scattered variety, even in the areas that get a half inch to three quarters of an inch.  That’s what we’re expecting at this point.”

About three waves of light freezing rain are expected to pass through the state over the two days plus period.

Browning says the predicted ice accumulations reflect a buildup over that time.  “(It’ll have) a cumulative effect, being ice amounts in that heaviest band of accumulation between Kansas City, Springfield and west of St. Louis.”

Browning says untreated roads will be treacherous for drivers, although major highways and interstates should be much less perilous.  He thinks the state Transportation Department (MODoT), the agency responsible for maintaining a large majority of Missouri’s roads, will be able to handle the storm with few problems.

“We’re in constant contact with MODoT.  We have twice daily conference calls with them to advise them of the expected weather conditions, and they plan accordingly.”

The National Weather Service has held several news conference calls over the last several days to update its latest forecast for the storm.  One more is planned Friday afternoon.

MODoT has send out several releases outlining its mobilization efforts.  Governor Greitens held a news conference Thursday to declare a state of emergency over the storm.   He also activated the state Emergency Operations Center Wednesday.