You are here: Home / Sports / Cunningham nets 32 but Mizzou still falls at LSU 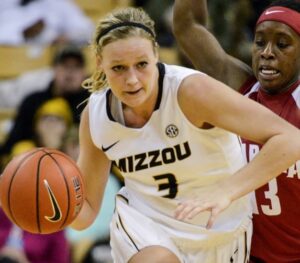 Mizzou Women’s Basketball dropped a road contest at LSU, 80-71, on Thursday night. Sophomore Sophie Cunningham (Columbia, Mo.) poured in a season-high 32 points, but LSU held on behind a strong second half. Cunningham made 12-of-17 attempts (70.6 percent) and drained a season-best five three-pointers.

Thursday’s performance marked the fifth time in her career that Cunningham has shot 70 percent or better from the floor when taking at least five attempts. She has now scored at least 20 points in a single game 15 times and 30 points in a contest twice.

Redshirt senior Lindsey Cunningham (Columbia, Mo.) matched her career-high for the third time with 16 points on 7-of-10 shooting. Two of her three career 16-point performances have come against LSU. Lindsey Cunningham also dished out a season-high eight assists in a solid all-around outing.

Senior Sierra Michaelis (Mercer, Mo.) chipped in 14 points and hit four three-pointers to help Mizzou finish with a season-high 12 triples. Mizzou made 12-of-22 from beyond the arc in the loss.

The Tigers in black and gold continued a trend of starting hot with a strong opening quarter. Mizzou raced out to a 21-16 lead as Sophie Cunningham set the tone early with 10 points in the first 10 minutes of action.

LSU swung the momentum with an 8-0 run to begin the second frame, but Michaelis seized it back with efficient shooting. The senior scored 11 consecutive points for Mizzou, including three trifectas to push her squad back in front by three as head coach Robin Pingeton’s team took a 34-31 lead into halftime.

Trailing 40-35 following another bucket by Sophie Cunningham, LSU catapulted ahead by seven after a key 12-0 spurt. Again, Mizzou responded, this time behind the Cunningham duo. Sophie Cunningham drained a pair of threes to pull Mizzou within two and then a tough driving layup by Lindsey knotted the score at 57-57 with 7:34 left.

LSU snatched the lead back with a 6-0 run and never relinquished its advantage down the stretch, cashing in from the free throw line. Mizzou could not erase another deficit and fell in a seesaw battle.

Mizzou continues its road swing with a trip to Vanderbilt on Sunday. Tip off is set for 2 p.m. CT