Republican Governor Eric Greitens was sworn into office in front of the state capitol in Jefferson City Monday. 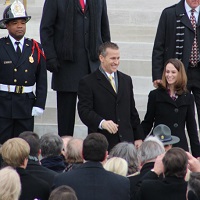 He’s the 54th person to be elected to be head of state, and will oversee Missouri’s 56th gubernatorial administration.  According to former Missourinet news director Bob Priddy, the inconsistency stems from two previous Missouri heads of state, Republican Kit Bond and Democrat Philip Donnelly, who had non-consecutive four-year terms, or administrations.

The ceremony was held in front of a large crowd of Greitens supporters. It took place at 12 noon following the traditional ringing of 12 bells at St. Peter’s Catholic Church across the street.

While delivering his address, Greitens touted himself as an independent voice for the public.  “This is the people’s house.  And to those who would trouble this house for their own selfish and sinful gain, hear me now.  I answer to the people.  And I come as an outsider to do the people’s work.”  Greitens is a political newcomer, having never before held public office.

The Republican expressed a central theme of conservative politics by calling for limited government.  “One of the worst lies of our present politics is the false promise that government can fix any problem and find every answer” said Greitens.  “That never has been and never will be part of America’s promise to its people.”

He also wrapped the sentiment into the state’s motto. “Our state’s great history reminds us that Missourians have always understood that big achievements demand hard work.  “Show me” doesn’t mean “Give me.” It means “prove it can be done, and we will do it.”

Greitens assumes the governor’s seat after running on a platform of ethics reform and ridding Jefferson City of corruption.  Shortly after the swearing in ceremony, he went to his office to issue a number of executive orders, including one which forbids executive branch employees from accepting gifts from lobbyists.

Early Monday afternoon, country music star Sara Evans was announced as the entertainment at the inaugural ball later on in the evening.