The Missouri House General Laws Committee will hold a public hearing Monday morning on an ethics bill that’s one of the top priorities for House Speaker Todd Richardson (R-Poplar Bluff). 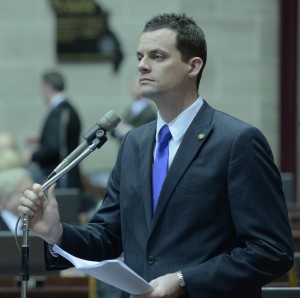 During his opening day address, Richardson says a gift ban will be the first bill passed by the House.

“Missourians also want a government they can believe in and trust,” says Richardson. “Last year, through the work of members in this (House) body, we passed the first substantive, meaningful ethics reform in modern Missouri history.”

“I said at the end of last session (2016) that the House would return to work this session, on ethics, by passing a ban on lobbyist gifts,” Richardson says. “We will fulfill that commitment, and a lobbyist gift ban will be the first bill that leaves this House.”

The General Laws Committee, which is chaired by State Rep. Robert Cornejo (R-St. Peters), will hear testimony Monday morning from Representative Alferman about his bill.

Alferman tells Missourinet his bill includes exemptions for flowers, plants, speaking fees and any gift that would be given to all 197 state lawmakers. Examples of that would include food provided to all lawmakers, for a legislative function.

Kendrick tells reporters he wants to work to pass an ethics law that contains the main provisions that Greitens campaigned on last fall.

“There’s a clear mandate from the people of Missouri that we end business as usual,” Kendrick says. “And for someone who spoke as often and as eloquently as he (Greitens) did about rooting out corruption, it’s time to act.”

Kendrick has filed HB 217, which bans lobbyist gifts to elected officials, and to their spouses and dependent children. It would also increase the waiting period for an outgoing lawmaker or outgoing statewide officeholder to register as a lobbyist from six months to five years.

Kendrick says that during 14 years of GOP control, “it has become increasingly more difficult for the voices of regular Missourians to be heard.”