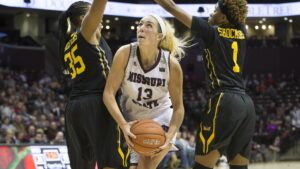 Missouri State 28 points and shot 67 percent in a fourth quarter that included a game-deciding 12-0 run Friday for a 73-62 Missouri Valley Conference victory over Wichita State at JQH Arena.

Missouri State never trailed after a 7-0 run in the first quarter put the home team ahead 15-9 on a Fruendt jumper seven minutes into the game. The Lady Bears extended the lead to nine points at 24-15 on another trey by Fruendt with 4:37 left in the second quarter, and the junior scored the final five points of the half for a 29-22 lead at intermission after the Shockers pulled within a bucket.

MSU scored the next five points and the Shockers (5-9, 0-3) knotted the score at 47-47 with 8:29 to play before Willard started a 12-0 run with a jumper and ended it with a 3-pointer that made the score 59-47 with 5:23 to play. The Lady Bears remained ahead by double digits for the remainder of the contest, finishing the final period 10-for-15 from the field with eight assists and only two turnovers.

Missouri State shot 43.1 percent in the game and 17-for-23 from the foul line, ending the contest with a 40-30 rebounding margin and 16 assists against 14 turnovers.

The Lady Bears play their first road game in more than a month when they visit Evansville for a 7 p.m. game on Jan. 13.