You are here: Home / Business / Both sides on right-to-work issue to testify Tuesday at Missouri Capitol

A Missouri House Committee will hold public hearings on five right-to-work bills Tuesday afternoon at the Statehouse in Jefferson City. 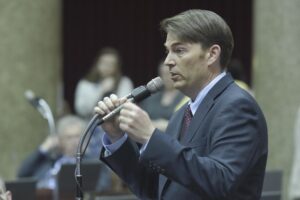 “The voters have spoken. Our majorities campaigned on it and the Governor’s race was fought over it,” says Richardson. “Missouri should be and soon will be a right-to-work state.”

“I want to give you one statistic,” Richardson says. “According to the Bureau of Labor Statistics, since becoming a right-to-work state in 2012, Michigan has added 58,000 manufacturing jobs. Over the last two years, Missouri has lost 1,200.”

Right-to-work says that a person cannot be required to join or refrain from joining a labor organization, as a condition of employment.

Supporters and opponents of right-to-work will have their opportunity to testify Tuesday before the Missouri House Economic Development Committee.

Committee Chair Holly Rehder (R-Sikeston) says there will be hearings for all five right-to-work bills on Tuesday. Rehder tells Missourinet a committee vote is not expected on Tuesday.

“Right-to-work would mark a drastic shift in labor law in Missouri,” says Beatty. “This simply is too important a decision to leave to politicians acting on the orders of wealthy donors. Missouri voters must have the final say.”

About 60 percent of Missourians voted against right-to-work in 1978.

Rehder says things are different now. She says union membership was about 30 percent in 1978, and is now less than eight percent.