You are here: Home / Sports / #Blackhawks look to use their experience in outdoor games early against the #STLBlues (AUDIO) 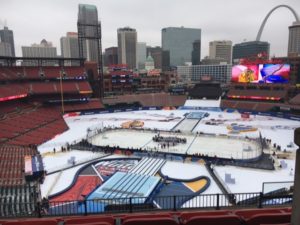 The Chicago Blackhawks roster has 42 games of experience in playing NHL games outdoors…the Blues have three.  Robert Bortuzzo, Jay Bouwmeester and Carl Gunnerson have each played a game outside.  As the Blues get ready for their first outdoor game, this is old hat for the Hawks who will be making their fifth outdoor appearance.

Hawks captain Jonathan Toews and star goal scorer Patrick Kane talk about using that experience to their advantage early.  Kane admits the atmosphere at Busch Stadium and the rivalry between Chicago and St. Louis will be unmatched.

* The Blues will become the 23rd NHL team to participate in a regular-season outdoor game. The Blackhawks will be appearing in their fifth such contest (1-3-0), the most in the League, as well as their third Winter Classic (also 2009 and 2015).

* Blackhawks captain Jonathan Toews has scored the most points in NHL regular-season outdoor games (2-4–6 in 4 GP).

* The NHL’s 19 regular-season outdoor games have drawn a total attendance of 1,054,295 – an average of 55,489 per game. NHL outdoor attendance surpassed the 1-million mark at the 2016 Coors Light NHL Stadium Series game between the Avalanche and Red Wings at Coors Field in Denver on Feb. 27, 2016.

Blues captain Alex Pietrangelo feels that getting out on the ice on Sunday will help calm their teams’ nerves and excitement surrounding the game.

* The Blues and Blackhawks have competed in the same division every season since 1970-71, tied with the Bruins and Sabres for the longest active streak in the NHL. They have met in the Stanley Cup Playoffs at least once in each of the past five decades.

* The 2017 Bridgestone NHL Winter Classic will mark the 305th all-time regular-season meeting between the Blues and Blackhawks. Chicago leads the all-time series, (146-113-45).

* The 2017 Bridgestone NHL Winter Classic will mark the fourth of five contests between the Blues and Blackhawks in their 2016-17 season series (STL 1-1-1; CHI 2-1-0). In their final matchup before meeting outdoors, on Dec. 17, the Blackhawks scored three unanswered goals in the third period to win 6-4 and halt the Blues’ home point streak at 14 games.

* The Blues and Blackhawks have met 12 times in the Stanley Cup Playoffs, with Chicago owning an 8-4 edge. The only franchise the Blues have faced more often in the postseason is the Dallas Stars (13 times), while the Blackhawks have only faced the Canadiens (17) and Red Wings (16) more often.

* The Blackhawks qualified for the Stanley Cup Playoffs for 28 consecutive seasons from 1969-70 through 1996-97, the second-longest such streak in NHL history. The Blues made the postseason for 25 straight years from 1979-80 through 2003-04, tied for the third-longest streak.

* The first-ever playoff meeting between the Blues and Blackhawks occurred in 1973, a best-ofseven Quarterfinal. Chicago won the series 4-1, outscoring St. Louis 22-9.

* The Blues and Blackhawks have met in the postseason twice in the past three years, with 10 of the 13 games decided by one goal. In 2014, Chicago rallied from a 0-2 series deficit to win in six games while the Blues prevailed in overtime of Game 7 in 2016.

* While the Blues are making their outdoor debut, three players on their roster have appeared previously with other clubs: Robert Bortuzzo (for Pittsburgh in 2014 Coors Light NHL Stadium Series), Jay Bouwmeester (for Calgary in 2011 Tim Hortons NHL Heritage Classic) and Carl Gunnarsson (for Toronto in 2014 Bridgestone NHL Winter Classic).

Bouwmeester talks about playing outside