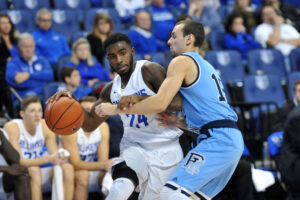 Saint Louis dropped a 90-56 decision to Rhode Island at Chaifetz Arena Friday night in the Atlantic 10 Conference men’s basketball opener for both teams.

Junior guard Aaron Hines, who made is fourth straight start for an injured Jermaine Bishop, scored a team-high-tying 14 points. Freshman forward Elliott Welmer also scored 14 points, thanks in part to a 4-of-5 performance from 3-point range.

The Rams, who were led by Kuran Iverson’s 19 points, won the rebounding battle 46-31. Rhody scored 40 points off SLU turnovers and offensive rebounds.

Welmer hit an early 3-pointer to give the Billikens a 3-0 lead, but Rhode Island responded with a 9-0 run. A Crawford layup at the 14:05 mark of the first half pulled the Billikens to within four of the lead, but that is close as they would get as the Rams opened up a 20-point lead in the first half. A Hines 3-pointer at the first-half buzzer made it 45-28 Rams at halftime.

It was much of the same in the second half, as the Rams shot 63.3 percent in the period and rolled to a 34-point victory.