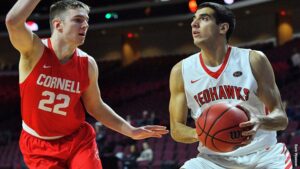 SEMO, which is on a seven-game losing streak, fell to its 10th loss of the season.

Cornell got off to a red-hot start making six of its first seven field goals with four 3-pointers to build an early 16-4 lead. Matt Morgan keyed the Big Red with three 3-pointers and 13 points in his first nine minutes.

Robert Hatter’s layup with one second on the clock sent the Big Red into the locker room with a 39-33 lead.

SEMO missed its first 15 field goals of the second half and went scoreless for a period of seven minutes. Cornell took advantage of the Redhawks shooting woes and used a 12-1 run to take its largest lead, 51-34, at the 12:29 mark.

The Redhawks managed to dice Cornell’s led to eight on Benton’s free throws with 5:53 to go, but that was as close as they would get the rest of the way.

Benton went a perfect 8-of-8 at the free throw line to key his second double-digit game of the season.

Eaddy, who didn’t make a field goal in his previous three games, drained three 3-pointers and made 2-of-2 free throws in 21 minutes.

Cleveland left the game with a bruised hip and elbow in the first half, but did return. He scored nine first-half points en route to scoring double figures for the 24th-consecutive time.

Vranes paved the way with a team-high seven rebounds in 31 minutes off the bench.

Morgan pitched in a game-high 21 points and Hatter turned in a double-double 13 points and 11 rebounds to lead Cornell. Fellow starters Stone Gettings (16) and Troy Whiteside (11) scored double figures, as well.

SEMO breaks for the Christmas holiday before hosting Henderson State on Dec. 29.