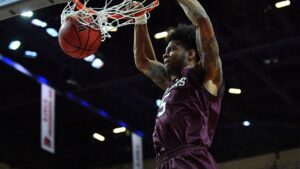 Missouri State (9-4) got 17 points and 12 rebounds from Alize Johnson and a career-high 16 points from Obediah Church to take down DePaul, 69-58, here Friday in the third-place game of the Continental Tire Las Vegas Classic.

The Bears, who led for nearly 33 minutes, avenged a two-point loss at DePaul on Nov. 23 and finished the four-game Vegas Classic with a 3-1 record.

Billy Garrett led three DePaul players in double-figures with 16 points. The Blue Demons (7-6) also got 11 points from Tre’Darius McCallum and 10 from Brandon Cyrus.

After Missouri State led by a dozen at the intermission, DePaul whittled the MSU lead to six points twice early in the second half. But sophomore Ryan Kreklow ended the Bears’ drought with a layup on a nice pass from Church at the 16:38 mark.

He would score MSU’s first six points of the second stanza and accounted for 11 of 14 Bears’ points at a key juncture of the game. His run-out bucket with 15:40 to go pushed Missouri State’s lead back to double figures, 43-33, and got MSU’s offense back on track.

Kreklow finished with 13 points and a career-high 6 rebounds.

MSU’s defense held DePaul without a field goal for the next seven minutes and kept the Bears afloat while the offense grinded through hard-fought possessions. Church and Chris Kendrix posted traditional 3-point plays during the stretch with Church finishing 4-of-5 at the foul line and 6-of-7 from the field to cap a career night in his return to the starting lineup.

DePaul made one last run with about seven-and-a-half minutes to go with a dunk by McCallum and a scoop shot from Cyrus to make it a 53-47 contest. But Johnson, who sat most of the second half with three fouls, returned to the floor for MSU and immediately scored four points in less than a minute.

Dequon Miller helped MSU handle the DePaul press in the final moments and tossed a pair of alley-oop passes to Church who threw down two key dunks inside the six-minute mark.

Church, who had four dunks on the night, gave the Bears a 61-51 lead with 4:37 to go. He then helped ice the win with two clutch free throws at the 3:23 mark. Jarred Dixon and Kendrix scored MSU’s final two buckets to elude a pesky Blue Demons’ defense in crunch time and give the Bears a double-figure win over the Big East program.

Coach Paul Lusk’s team out-rebounded DePaul by a 44-29 margin – including 16 offensive boards — and went 24-for-37 (.648) on its two-point shots. The Bears finished with 46 points in the paint, their second-highest total of the season.

In the first half, Johnson scored 13 points, including 9 on a critical 16-3 run by the Bears over a four-and-a-half minute span. Missouri State went from a 17-13 deficit with nine minutes to go in the half to a 29-20 lead in the blink of an eye with the help of Johnson and support from big men Church and Tyler McCullough.

Back-to-back dunks by Church wrapped the run and forced DePaul into a timeout with 4:09 left in the opening period. The Bears surrendered a pair of free throws to Garrett after that but then responded with an 8-0 outburst to go into the intermission with a 37-25 advantage.

The Bears will begin Missouri Valley Conference play at Northern Iowa (5-6) on Wednesday, Dec. 28 at 8 p.m. on FOX Sports Midwest. MSU returns home on Dec. 31 to do battle with Indiana State at 11 a.m. in another FSM broadcast showdown.

Previous Post: « SEMO losing streak to seven after loss to Cornell in Vegas finale
Next Post: Missouri electors not penalized if they fail to back the party’s nominee »