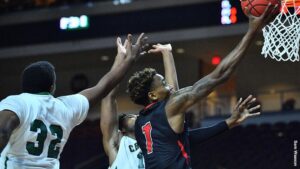 Antonius Cleveland scored 26 points, including 20 in the first half, and Southeast Missouri (4-9) suffered its sixth-straight loss, 74-65, to Chicago State (4-9) Thursday afternoon at Orleans Arena.

The Redhawks trailed 68-65 and later missed three field goals and turned the ball over once on their last four possessions.

Fred Sims Jr. scored on a layup right after SEMO pulled to within three. Trayvon Palmer then grabbed an offensive rebound and scored, and Joshua Batson knocked down two free throws in the final 49 seconds to finish off the win.

Cleveland carried SEMO in his big first half scoring all his points in 19 minutes. He outscored five other Redhawks who combined for a quiet 11 points.

The Redhawks were down, 36-30, at halftime despite Cleveland’s strong effort.

Palmer led CSU with a double-double 18 points and 15 rebounds. He shot 7-of-11 from the field, made 4-of-5 free throws and played 40 minutes. Sims Jr., who fouled out with 6:41 remaining, followed with 17 points and six rebounds, while Deionte Simmons added 17 points.

CSU scored 36 points in the paint, pulled down 13 offensive rebounds and scored 14 of its field goals on layups.

Cleveland shot 6-of-11 from the field and made a career-high 12 free throws. He also knocked down a pair of 3-pointers and dished out three assists. Cleveland scored 20 or more points for the third-consecutive game and fourth time in five starts.

SEMO dropped to 1-6 this month.