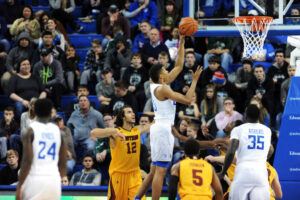 The Billikens (4-8) will have a short Christmas break before beginning preparations for their A-10 opener against Rhode Island, set for Friday, Dec. 30, at 6 p.m. at Chaifetz Arena. The game will be televised on ESPNU.

Junior guard Davell Roby, who was coming off his first-career double-double in the Billikens’ last game, scored a game-high 17 points. Freshman forward Jalen Johnson registered a career-high 13 points thanks in part to three 3-pointers.

Winthrop went on top 9-0 at the start and the Billikens didn’t get their first field goal until Matt Neufeld scored inside five minutes into the game. SLU managed to claw back and tied the score briefly at 12-12, but Winthrop built a double-digit lead late in the first half and went into halftime leading 35-26.