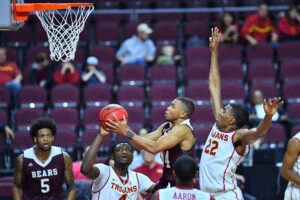 Missouri State allowed just one field goal in the final four-and-a-half minutes and put a scare into unbeaten and No. 23-ranked Southern California here Thursday in an 83-75 semifinal loss to the Trojans in the Continental Tire Las Vegas Classic.

The Bears (8-4) scored 33 points in the final 10 minutes of the game and used a flurry of 3-pointers down the stretch to get as close as seven in the final moments before conceding a hard-fought defeat. USC (12-0) made 15-of-16 foul shots in the final two minutes, 17 seconds to ward off the upset-minded Springfield club.

MSU, which set a school record with 36 3-point attempts, made 14 of them — by six different players – and made six in the final four-plus minutes of the game.

“We got into a rhythm late and kept trying to find a way,” said MSU head coach Paul Lusk. “We tried to space them out and make threes. We always stayed within striking distance all night, and we continued to fight to the final buzzer.”

Alize Johnson finished with 17 points, 9 rebounds and 5 assists for MSU, while Ronnie Rousseau III added 17 points. Ryan Kreklow contributed 12 off the bench with Dequon Miller pitching in 11 for Lusk’s troops.

The Trojans came out of the timeout with a 30-foot triple by Elijah Stewart as the shot clock expired to shift momentum briefly back to USC.

Stewart finished with a game-high 21 points behind four treys.

But the Bears kept their composure and began climbing out of the deficit near the four-minute mark, first on a trey by Johnson, then on a close-range bucket by Miller to get back within nine of the lead.

Johnson would drain two more long-range bombs before the one-minute mark, the second of which made it 70-63 with 1:23 on the clock.

In the final 48 seconds, Kreklow drained two treys and Rousseau hit a triple and three free throws to get the final margin to eight.

USC finished 17-of-19 (.895) at the free throw line with nearly all of its attempts coming in the final four minutes.

“Give credit to them,” Lusk said. “They made free throws when they had to have them, and that’s the sign of a great team. Our guys played hard and that’s evident by our 12 offensive rebounds and how we hustled for every loose ball.”

The Bears trailed 39-28 at the break and only trailed by more than 14 points for two minutes of clock time.
USC shot 55 percent from the field and out-rebounded the Bears by a 36-32 margin with the Bears allowing the Trojans just six second-chance opportunities.