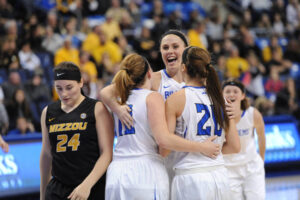 Mizzou Women’s Basketball (10-4) could not respond to an offensive explosion by SLU (9-3) in the fourth quarter as the Tigers lost, 72-61, Wednesday night at Chaifetz Arena. Mizzou held a 15-point lead after three quarters but Saint Louis’ hot shooting late propelled the Billikens to a win.

Sophomore guard Sophie Cunningham (Columbia, Mo) led all scorers with 21 points on 7-of-12 shooting (58.3 percent). Cunningham drained a season high four three-point shots on six attempts (66.7 percent). The only other game Cunningham made more threes was when she nailed six during her career high 42-point performance against Wake Forest last season. Cunningham also led Mizzou in assists, dishing out four. This was the third 20+ point outing of the season for Cunningham. She now has 13 such performances in her career.

Sophomore forward Cierra Porter (Columbia, Mo.) continued her strong nonconference play by chipping in 16 points and nine rebounds. She is now averaging 18.4 points and 11.2 rebounds in her last five games. Porter went 6-for-7 (85.7 percent) from the free-throw line tonight to continue her solid work at the charity stripe this season.

Redshirt junior Kayla McDowell (Cincinnati, Ohio) set a new season high with nine rebounds on Wednesday. Mizzou outrebounded the Billikens, 35-32. The Tigers have now outrebounded opponents in 11 of its 14 games so far this season.

The first quarter was a back and forth affair early. Mizzou used strong defensive play to force five turnovers in the opening frame, helping the Tigers finish out the quarter on an 11-2 run. That swing gave Mizzou a 19-14 lead after 10 minutes of play.

Mizzou continued to clamp down defensively in the second quarter, holding Saint Louis to just six points in 10 minutes of play on 2-of-13 (15.4 percent) shooting. The Tigers outrebounded the Billikens 13-5 in the second quarter while draining four threes to take a 35-20 at the halftime break.

Mizzou maintained its advantage in the third frame, but the lead evaporated quickly in the fourth quarter as Saint Louis caught fire and buried a flurry of baskets to erase its deficit. Saint Louis shot 10-of-16 in the final frame. Another Billiken trey pushed Saint Louis in front 62-58 with three minutes remaining. The Billikens held on for the victory behind clutch free throws and defensive stops.

Mizzou will take the court again Jan. 1 against Georgia to begin SEC play. Tipoff for that contest is set for 12 p.m. on SEC Network.

Previous Post: « Missouri law boots 41,000 off food stamps, 19,000 children off other temporary assistance
Next Post: Braggin’ Rights go to the Illini for the 4th straight year over Mizzou »