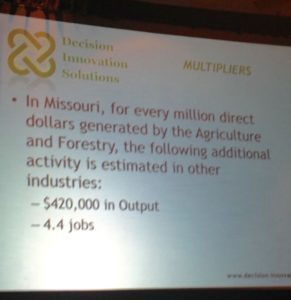 “We’ve been looking for a tool to explain to folks who aren’t directly involved in agriculture how important it is to our state in a sense we’re able now to quantify the economic contributions of this important industry,” says Cassidy.

More than 375,000 jobs are tied to Missouri agriculture and tax revenues are more than $6 billion a year.

An Iowa firm conducted the study.