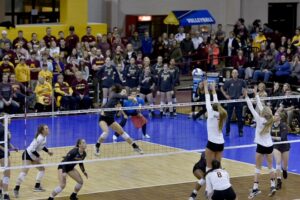 Junior OH Melanie Crow (Wildwood, Mo.) added 12 kills, seven digs and two blocks and Thater pitched in seven kills on .278 hitting with two blocks and a pair of aces. Ethridge posted 19 digs, just missing her third 20-dig outing of the year, but it was her best four-set total of the season. Junior setter Courtney Eckenrode (The Woodlands, Texas) posted her seventh double-double of the season with 36 assists and 11 digs.

The second-seeded Gophers ran out to an 8-4 lead early in the first set despite Mizzou getting a pair of early blocks. The Tigers made three uncharacteristic attack errors in the stretch, forcing Coach Kreklow to call timeout. Minnesota kept the foot on the gas to go up 15-7, but Mizzou cut the lead to 15-12 using back row attacks from Kan. But as quick as Mizzou got back into it, Minnesota ran off a 5-0 run and that put the set away with the Gophers taking the first frame, 25-15.

Mizzou played better to open the second frame behind the attack of Kan and opened a 13-10 lead after a pair of strong serves from Kira Larson (Fargo, N.D.). Mizzou grew the lead to 14-10 out of the timeout following a kill by Emily Thater (Springfield, Mo.), but Minnesota scored the next five points and wound up on top 17-16. Mizzou then got back-to-back kills from Kan and Crow and an ace from Thater to open a 19-17 lead.

The trading of runs continued as Minnesota tied the set at 19-all after a pair of kills, but Mizzou answered right back and that stole momentum, taking set two, 25-21.

Following the break, Minnesota raced out to an 8-3 lead as it connected for kills on its first six swings. Mizzou fought to get back into the set and got as close as 14-10, but the Gophers sided out from there and won the third, 25-19. Minnesota kept it going in the fourth set and ran away with a 25-14 set win to close out the match.

Previous Post: « Seniors lead Mizzou women’s hoops to victory
Next Post: #Mizzou battles back to within two possessions before Arizona pulls away »