A gun control advocacy group contends Missouri is headed in the wrong direction in protecting the lives of law enforcement personnel.

The organization Everytown for Gun Safety recently released a report showing 200 officers have been wounded or killed i n shootings this year.  Its data reveals Missouri has the third highest rate of those incidents in the country.

State Representative Marsha Haefner (R-Oakville) doesn’t think background check laws would provide officers with more safety.  “I would like to see some data before anyone connects those dots, so see if the shootings on these police officers were done with people who legally possessed the fire arm” said Haefner.  “My guess is that’s not the case.” 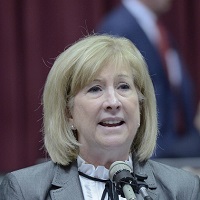 Haefner doubts anyone who would be willing to commit a crime against a police officer would make an effort to obey gun laws.

A similar measure was introduced last Thursday by an incoming state representative from the St. Louis area.  The Springfield News-Leader reported Nick Schroer (R-O’Fallon) said protecting law enforcement and first responders is a pressing concern, and that he hopes hate crime status would work to deter future attacks.

Two officers, one each in St. Louis and suburban Kansas City, were shot on the same day – November 29th – just over two weeks ago.

As far as Missouri having the third highest rate of gun violence against law enforcement personnel, Tofte, with Everytown for Gun Safety says much of the problem can be attributed to the state’s repeal of its background check law in 2007.  “There’s been quite a bit of research on the impact that repeal has had on communities in Missouri” said Tofte.  “Essentially what you see is gun homicide rates have gone up significantly.  There’s been about a 25 percent increase in gun homicides in Missouri since the background check law was repealed.”

Everytown for Gun Safety strongly opposed a new statute this year which allows Missourians to carry concealed weapons without permits or training.  The group notes the state police union – Missouri Fraternal Order of Police – also attempted to discourage lawmakers from passing the measure.

Tofte says Everytown for Gun Safety will campaign against efforts to eliminate more gun restrictions in the upcoming legislative session which starts January 4th.  “I know there will be a fight in this session around campus carry, around allowing guns on campus.  We will be there for that because those kind of laws make communities less safe.”