Missouri Governor Jay Nixon has helped decorate the Capitol Christmas tree in Jefferson City, saying the holidays are a time to reflect on what Missourians are thankful for. 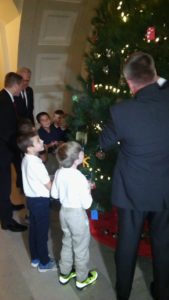 First-grade students from Immaculate Conception School in Jefferson City have helped the Governor decorate the Christmas tree outside of the Governor’s Capitol office.

“For many Missouri families, a Christmas tree is a timeless tradition. Last Friday, the First Lady and I turned on the lights at the trees of the Governor’s Mansion, and hundreds of people came through to see the decorations and be welcomed to those great sounds of Missouri choirs,” Nixon says.

Nixon says Missourians are thankful for their families, friends, faith and traditions.

“Whereas the Missouri Christmas Tree Association strives to provide high-quality Christmas trees to consumers, and to promote the benefits of the Christmas tree industry to our state’s economy and environment,” says Nixon.

Nixon says Missouri has a long history of having some of the best Christmas tree farms in the country.

Jackson-based Meier Horse Shoe Pines donated the Capitol Christmas tree, and the Christmas wreath has been donated by Eileen Meert of Meert Tree Farm in Festus. Jackson and Festus are both located in southeast Missouri.

Meier and Meert are part of the 36-member Missouri Christmas Tree Association.