I’ve been criticized over the last few days for preaching patience with Kim Anderson and this young Mizzou men’s basketball team.  After a poor shooting night led to a loss against North Carolina Central and a sub-par performance against Western Kentucky when the Tigers went stale in the second half, the fringe lunatic Tigers fans had enough of Anderson and the excuses.

After another sub-par first half on Tuesday night against Miami-Ohio, the raving maniacs were at it again on Twitter, going after me for my comments about taking a “wait and see” approach.  The words of one crazed fan came back to bite him.

@missourisports Whats Mizzou’s excuse tonight vs one of the worst teams in the country?

Mizzou started the second half with a big run and cruised to an 81-55 victory over the Redhawks at Mizzou Arena, after holding a one-point lead at halftime.  Mizzou used a 16-0 run to open a big lead in the first half, only to see Miami respond and take the lead.  A late three-pointer by Terrence Phillips put the Tigers on top at the break.

“The idea of getting leads and then losing leads, that’s not acceptable,” head coach Kim Anderson said. “We can’t continue to do that. This team will only be as good as how it reacts to adversity… Our margin of error isn’t as great as some teams.”

Mizzou came out of halftime on a 20-5 run and rarely let up, outscoring the RedHawks 55-30 in the second half.

Do you want to eat crow now, or save it for later? https://t.co/JqGlZpTXVc

Sophomore forward Kevin Puryear (Blue Springs, Mo.) led the team in scoring with 19 points (7-of-13 FG, 0-of-1 3PT, 5-of-8 FT). Senior forward Russell Woods (Chicago, Ill.) recorded his first career double-double, scoring a career-high 15 points and grabbing 10 rebounds. Woods scored all 15 of his points in the second half.

Mizzou continues its home stand with its fifth consecutive home game against No. 20 Arizona on Saturday, Dec. 10, at Mizzou Arena. Tipoff is set for 11 a.m. CT.

Now, if you think I’m standing high on the mountain top singing the praises of this team, don’t fool yourself.  I have never given the illusion that this Mizzou team was going to make noise this year, next year or even the year after that.  All I said was give this team some time before you rush to judgment.  After shooting performances of 25%, 35% and 37% in the last three games…Saturday could be ugly. 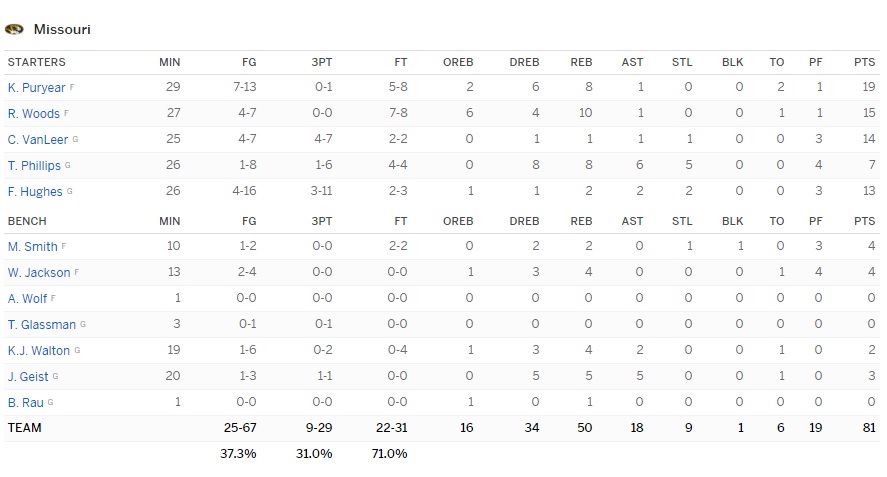