(NASCAR)—Columbia driver Carl Edwards drove 13,560.46 miles this year but it was the fifteen that he didn’t have a chance to go that made an unfortunate difference. A crash with ten laps to go in the last race of the NASCAR Cup season wiped out his shot at a championship that was within his reach but Edwards says 2016 was a “heckuva year.”

Edwards has told NASCAR’s championship gala audience in Las Vegas he was “super proud of my guys,” speaking of his team. “It’s amazing how we competed all year.  Dave (Crew Chief Dave Rogers) and I met before the start of the year. We set out or goals and we accomplished almost all of them, the primary goal being a team that stuck with one another, never gave up, and fought hard all year. I’m really proud of that.” 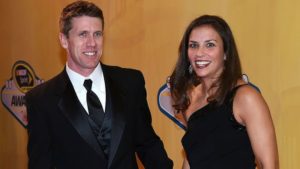 Edwards finished fourth in the standings (the sixth time in his 12-year career as a fulltime driver in the series that he has finished in the top five) after a crash ten laps from the end of the last race took him out of the lead for the championship.  He posted three wins (his most since 2008), raising his career today to 29.  He started from the pole in six races, finished in the top five nine times and in the top ten in half of the races. His 918 laps in the lead was the fifth-most of any driver.  His average starting and finishing positions were better than those of champion Jimmy Johnson.

The crash at Homestead “was tough…really tough on our team. It was probably the toughest thing I’ve gone through,” he said.  But in the wake of the disappointment, he says, he began thinking of his first win, in 2005 when he beat Jimmie Johnson to the flag by .028 second.  “The first guy invictory lane…was Jimmie dumping Gatorade on my head, high-fiving.”   Turning to Johnson, who won his record-tying seventh championship this year ten laps after Edwards’ crash ended chances for Edwards’ first title, Edwards told Johnson, “You’re inspiring as a competitor. You compete with class.  You’re an amazing guy. You’ve earned everything you’ve got and I’m proud to call you our champion.” 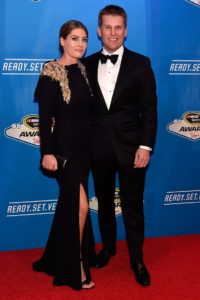 Missouri’s other driver in NASCAR’s top series, Jamie McMurray, made the championship chase for the second year in a row but for a second straight year came up short when trying to move into the second round of competition for the big trophy.  McMurray finished 13th in the standings.  He ran 10,198 laps but is one of two drivers who finished in the top twenty in points in 2016 who never led a lap.  Kasey Kahne was the other.  Only Landon Cassill finished more races than McMurray did.  He was running at the finish in 34 of the 36 races in the series.

Sometime-Missourian Clint Bowyer endured an awful year while waiting to move into one of the coveted rides in NASCAR.  Bowyer drove with a one-year contract for undermanned HScott Motorsports this year after Michael Waltrip Racing folded in 2015, waiting for his next ride to become available.

Next year he’ll be in Tony Stewart’s car.  Stewart has retired from NASCAR driving although he will continue to be part owner of Stewart-Haas Racing. Bowyer’s average starting position was 32nd and his average finish was 24th.

We won’t see these guys all duded-up like this for another year.  We’ll see them back in their firesuits in February when NASCAR gets ready for the Daytona 500.

(FORMULA 1)—A surprising announcement has left Formula 1 without a defending champion in 2017.  Nico Rosburg announced a few days after wrapping up his first title that he is retiring at the age of 31.  He’s the first world champion to leave F1 without defending his title since Alain Prost retired 23 years ago after winning his fourth crown. 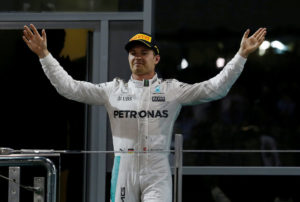 He says winning the championship has been his goal since he was a young boy but he doesn’t want to continue to deal with the pressure and the time away from his family. “I have climbed my mountain, I am on the peak, so this feels right,” he said.

(INDYCAR)—We’re about halfway between the 100th Indianapolis 500 and the 101st running of “The Greatest Spectacle in Racing.”  The face of 2016 winner Alexander Rossi has been put on the Borg Warner Trophy, joining teammate Ryan Hunter Reay (2014).

Rossi has picked up a new teammate at Andretti Motorsports: Takuma Sato, who moves over from the A. J. Foyt stable.  Sato replaces Carlos Munoz. Munoz replaces Sato with Foyt.  Marco Andretti is the fourth driver on the team.

Some of the top names in IndyCar have slipped into their 40s but none of them wants to talk about retirement.  Scott Dixon, who drives for Ganassi, and Penske’s Helio Castroneves, for example, say they still have miles to go in their careers.  Castroneves is still looking for his first series championship and his fourth Indianapolis 500 victory.  Dixon is still searching for his second win in the 500. 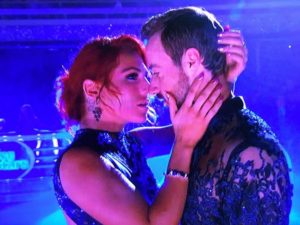 James Hinchcliffe calls is competition on Dancing with the Stars an “absolute miracle.”  He credits partner Sharna Burgess with making him competitive.  He finished a close second to Olympic gymnast Laurie Hernandez and her professional partner.  “To finish runner-up to someone that is an Olympic gymnast, I think, is a pretty impressive feat for someone who sits for a living.”

The death of actress Florence Henderson had a special meaning for IndyCar fans regardless of whether they are old enough to remember “The Brady Bunch.”  She performed “God Bless America” and “America the Beautiful” twenty-three times during pre-race ceremonies at the Indianapolis Motor Speedway. She was the Grand Marshall for this year’s Centennial 500.

(Photo credit: Dancing With the Stars)