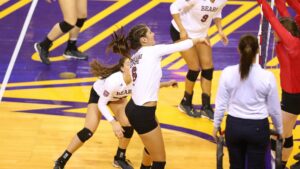 No. 18 Mizzou Volleyball (27-5) carried its momentum from Thursday evening into Friday at the Hearnes Center, earning a 3-1 (25-13, 22-25, 25-16, 25-21) victory over Purdue. The Tigers earned their first all-time win against the Boilermakers, while also supplying redemption from their previous meeting in the 2013 NCAA Tournament.

Mizzou now advances to the Sweet 16 in this year’s NCAA Division I Women’s Volleyball Tournament. It marks the Tigers’ first trip to the NCAA Regionals round since 2010.

The Tiger outside hitter’s performance against the Boilermakers will live in Mizzou Volleyball postseason lore for years to come. Crow’s 25 kills and 27.5 points both rank third-most in all-time Tiger NCAA Tournament action. In her first taste of NCAA postseason play, Crow has produced 42 kills (6.00 kills per set) on .393 hitting over two matches.

Junior Courtney Eckenrode (The Woodlands, Texas) was sensational for the second-consecutive night at setter. Her 51 assists led to the Tigers tallying 59 total kills on .346 hitting. Similar to Thursday against Northern Illinois, Eckenrode excelled at divvying up Mizzou’s attacks on offense. Along with Crow’s stellar performance, four other Tigers posted seven-plus kills to keep the Purdue defense on its heels.