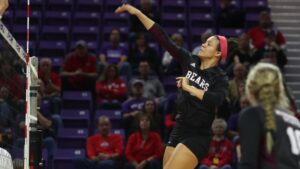 Missouri State’s 2016 volleyball season came to an end Friday evening with a 25-21, 25-15, 31-29 loss to Ohio State in the first round of the NCAA Tournament at Bramlage Coliseum.

The Bears (26-9) earned their most victories in a season since 2006 in another successful campaign that featured a Missouri Valley Conference regular season title and ninth trip to the postseason since 2003.

MSU got off to a quick start in the match, leading 6-3 on an Emily Butters ace and converting seven of their first nine attacks into kills for a 12-7 advantage. Ohio State (21-12) used a 4-0 run to gain its first lead at 17-16, the rattled off a 6-1 run for a 23-18 advantage after MSU tied at 17. Simone House and Lily Johnson combined for the Bears’ next three points to close to 23-21 before OSU stopped the rally and finished the set with four blocks and a .375 hitting percentage.

The Buckeyes jumped out to a 9-1 lead in the second set and never looked back. A block by House and Aubrey Cheffey for a 15-10 deficit was as close as the Bears would get, as OSU hit .306 in the set and forced eight MSU hitting errors.

The Bears led 15-11 on an Ashley Ophoven kill in the third set, and went up 19-16 on back-to-back kills from House and Lynsey Wright. The Buckeyes rallied to lead 23-21 before committing consecutive errors for a 23-all tie. OSU landed a kill for a 24-23 lead, and the Bears proceeded to spoil five Buckeye match point chances, and failed to convert one of their own at 25-24, before OSU ended the match with a kill.

Missouri State seniors House and Tatum Marshall each left their mark on the school’s record book after their final match. House finishes her time at MSU ranked third in career attack efficiency at .311, while Marshall’s 468 sets played is the sixth-most in MSU history. Freshman Daniele Messa’s 1,333 assists tie for 10th-most in school history, while Johnson’s 604 kills are the third-highest total, though her record streak of 45 matches with at least 10 kills ended against the Buckeyes.