Two key Missouri lawmakers have differing views on the impact that a right-to-work law would have in Missouri. 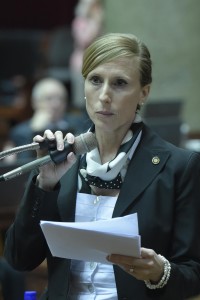 House Minority Leader Gail McCann Beatty (D-Kansas City) says if Missouri becomes a right-to-work state, it would mark a “massive shift” in the balance of power between employers and employees and would suppress wages. Beatty says any right-to-work measure that passes should be placed on the statewide ballot.

Right-to-work says that a person cannot be required to join or refrain from joining a labor organization, as a condition of employment.

“Indiana alone increased jobs, over 50,000 union jobs, good-paying union jobs they increased within two years of passing this bill. And so, what we have found is that the states that pass right-to-work, you have an influx of jobs,” says Rehder.

Rehder, who chairs the Missouri House Select Committee on Labor and Industrial Relations, is urging union members to study the issue closely.

“Search outside of the talking points that they’re being given by their union steward. They need to look into these other states that have passed right-to-work,” Rehder says. “26 other states have passed it already.”

Rehder is hopeful the measure will pass in 2017. Governor-Elect Eric Greitens (R) supports right-to-work, and Republicans have supermajorities in both chambers.

House Minority Leader Beatty has issued a statement, which reads in part “Missouri voters – not politicians and their special interest donors – must have the final say on this matter.”

While 60 percent of Missourians voted against right-to-work in 1978, Rehder says things are different now. Rehder says union membership was about 30 percent in 1978, and says it’s less than eight percent today.