This year’s Missouri Christmas trees have been installed at the Governor’s Mansion in Jefferson City. 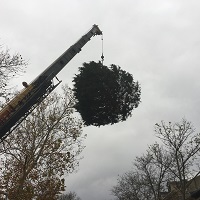 The annual lighting is Friday, December 2nd, with public tours taking place the same evening and the following Saturday afternoon.

A 30-foot Eastern Red Cedar sits outside the mansion.  It was donated by Bud Perrin of Independence, who was among 18 residents offering trees.  Holly Dentner with the state Conservation Department says the outside tree always come from a private citizen.  “We’re looking for trees that usually have overgrown their space” said Dentner.  “Most of the donations, in fact, this year were trees that were just too large for the front yard or the backyard of the residence where they were growing.”

Dentner notes the Conservation Department sent personnel to inspect tree’s offered by the 18 residents. “We send foresters out to check out the trees that we like, to make sure they’re the right height and width and that we can easily get them on our flatbed trailer and haul them in.”

According to Dentner, the Eastern Red Cedar is native to Missouri and something people would commonly “see on the side of the road”, but hasn’t been part of Christmas decorations in recent memory at the Governor’s Mansion.

“I think that the last few years we had spruces” said Dentner.  “This year we found this Eastern Red Cedar which one of my coworkers commented (that) back when he was a kid, they just went out in the back woods and picked out an Eastern Red Cedar and that was their Christmas tree every year.  He thought that would be kind of neat to do one this year at the Governor’s Mansion.” 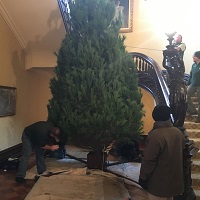 The inside trees are all white pines from the Pea Ridge Forest Christmas tree farm and wholesale nursery near Hermann.  An 18-foot tree sits next to the mansion’s staircase, while one standing 10-feet is on the back porch. Six 7-footers are located throughout the building’s first floor.

Dentner says the Conservation Department finances the harvesting and delivery of the inside trees and provides delivery of the large outdoor tree with no charge to the resident who donates it.

The annual lighting ceremony takes place Friday at 6:15 p.m. with public tours offered the same evening and the following Saturday afternoon.  Visitors will be able to view decorations in several rooms of the historic brick mansion, which has been the home of Missouri Governors since 1871.

Eight central Missouri school choirs will perform at various times during the lighting ceremony and public tours Friday and Saturday at the mansion.  Volunteer guides will help describe historical features throughout the building.

After the Saturday tours, visitors are encouraged stay in downtown Jefferson City to view the Jaycees’ annual Christmas parade.