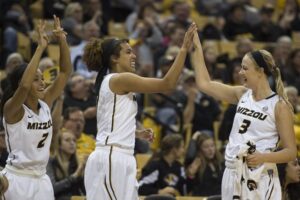 Mizzou Women’s Basketball opened play at the Junkanoo Jam in Bimini Islands, Bahamas, with an emphatic 72-63 victory over Creighton on Friday. Mizzou (4-1) shot an efficient 56.5 percent from the field en route to the win as the Tigers advanced to the Freeport Division Championship, in which they will face Georgia Tech at 1 p.m. on Saturday.

One game after fellow freshman Jordan Chavis tallied a career high 17 points in a breakout performance, Smith racked up a career-high 17 points against Creighton behind a 6-for-8 shooting effort from the floor. Smith used an inside-outside approach to stretch the defense, hitting her first two career three-pointers on Friday.

The game was a back-and-forth affair throughout the first half and featured six lead changes in the first 15 minutes of action. Porter and Smith scored nine points and eight points, respectively, in the opening half to lead Mizzou. Trailing by one with 1:25 remaining in the half, the Tigers turned to Cunningham, who absorbed a foul and converted a tough three-point play that gave Mizzou a 32-30 advantage at the break.

A timely 13-4 run in the third quarter allowed Mizzou to finally get a sizeable lead. Smith launched the momentum swing by burying a contested three-pointer. Porter followed with a pair of tough jumpers and after a Cunningham trey less than two minutes later, Mizzou led 47-38.

The Tigers led by as many as 16 with 8:08 remaining, but Creighton clawed back to cut the deficit to nine. Mizzou thwarted a comeback with clutch defensive stops and free throws in the final minutes.

Mizzou now has a chance to bring home a Junkanoo Jam Freeport Division title on Saturday. The game will be streamed live on FloSports (paid subscription video) and MUTigers.com (free audio).