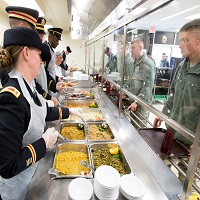 The base provides nearly 11,000 meals during its annual lunch celebration and more than 25,000 throughout the day.  Four tons of turkey is required to pull off the event which takes place in ten dining halls.

Installation Food Program manager William Moffitt says logistics have to be coordinated with the primary food vendor far in advance.  “We basically give them our estimated amounts of what we need at least six months out, prior to Thanksgiving” said Moffitt.  “That way, they can reach out to their sub-vendors and make sure that Fort Leonard Wood gets the turkey they need.”

The food’s prepared by more than 300 contract food service employees.  The celebration is so big, it encompasses those workers as well as the service members and guests they serve.  Moffitt says the base’s ten dining halls compete in categories such as best meal and best decorations.  “It’s an event.  So not only are they just preparing a Thanksgiving meal, they compete against each other.  Then we provide and award for the best out of all ten dining facilities.”

Because of the scheduling of military personnel, one of the dining halls served its Thanksgiving meals on Tuesday.  The other nine, which are assigned to units such as 2nd Battalion, 10th Infantry Regiment and 1st Engineer Brigade, serve theirs mostly simultaneously between 10:45 a.m. and 2 p.m.  Thursday.

Moffitt points to the involvement of the base’s leadership personnel as proof the event is an extravaganza.  “The colonels, the majors, the captains, the senior nco’s, they’ll actually serve the soldiers.  The come in in their service dress uniforms.  They’re dressed up and it’s a celebration.”

The installation’s 300 contract food workers spent several days preparing the meals.  The process of thawing the turkey took three days by itself.