Missouri Governor elect Eric Greitens has issued a statement on the shootings of officers Sunday in St. Louis and the Kansas City area. 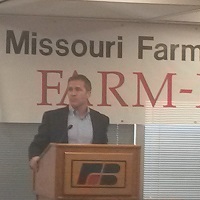 In it, he said “Two police officers in our state were shot yesterday. In Gladstone and in St. Louis, two families, and two departments, spent the night in worry and fear. These officers left their homes and stepped into the dark to protect us.  In the face of this violence, we must take action. We must stand up for those who stand guard for us. In the year ahead, my administration will push for the strictest possible punishments for anyone who assaults a police officer.”

Greitens said his administration would work to establish a “Blue Alert” system which would be similar to similar to Amber and Silver Alerts.  Emergency notices would be sent out to speed up the capture of anyone who shoots a police officer.

A man being sought as a suspect in the shooting of a St. Louis police officer Sunday night was shot and killed in a shootout with police early this morning.  The officer shot was in critical but stable condition.  And an officer and a suspect in suburban Kansas City were shot and wounded last night in an apparent traffic stop.

Previous Post: « The Bill Pollock Show–Long term issues for the #Chiefs and #Mizzou – plus listen to my train wreck interview with football fans #mopreps (Podcast)
Next Post: #STLCards fill hole in the bullpen by signing lefty reliever to a $30.5 million contract »